Reams of newsprint, hours of air-time and extensive analysis were devoted to the ‘cartoon controversy’ in 2012. It has been covered from so many angles already that it may seem presumptuous to revisit the subject once again, but much of the earlier material was written in the heat of the moment, before the full facts were known or without placing the furore in a wider context. The row erupted over the use of an old caricature in a National Council of Educational Research and Training (NCERT) textbook. The image depicted Ambedkar – whip in hand – sat astride a snail representing the Constitution of India, whilst Nehru stands behind them with a raised whip. Dalit activists interpreted this as Nehru whipping or belittling Ambedkar, and launched protests across the country demanding its removal. Thirumavalavan was an MP at the time and brought Parliament to standstill with an impassioned condemnation, whilst disgruntled Dalit activists in Mumbai ransacked the office of Suhas Palshikar – one of the leading academics on the NCERT board.

A 1949 cartoon drawn by Shankar Pillai on Dr. Ambedkar and Jawaharlal Nehru which was reproduced in a school text book. The cartoon was removed after widespread protests stating that it was insulting Ambedkar.

The earliest indications I had of the brewing storm came from the facebook pages of Dalit activists. In these intimations there was no sense that the NCERT textbooks had already been in circulation for a considerable time or that the cartoon was a historical one that had been published while Ambedkar was still alive. These pages, rather, expressed outraged disbelief that a national icon could be so denigrated and ridiculed in a government text-book. There was a sense that Ambedkar’s caste was not incidental to his continued marginalisation. ‘What do they hope to achieve’ and ‘who are they trying to provoke’ were questions raised in these posts.

Whilst no-one would wish to condone or justify some of the intemperate language used in this issue or (especially) the actions of the hoodlums who attacked Palsihkar’s office, wishing these away or describing them as ‘emotional outbursts’ does little to help understand why they occurred. Many commentators (see Teltumbde 2012) have rightly noted that Ambedkar himself urged his followers not to deify him or regard him as a prophet, but other than indicating the writers’ complacent sense of being better Ambedkarites than the protestors, this does not get us very far. It is only by placing this episode within a wider socio-political context that we can comprehend the rage demonstrated in its wake.

The first point to note is that symbols are vitally important and to dismiss concerns around them as tokenism or ‘symbolic politics’ does a disservice to their significance (Rao 2009). Symbols are central to how we understand and frame the world around us. The nations we live in and communities we belong too are all founded on and sustained through symbols of various forms. Especially in contexts of high poverty and illiteracy symbolic means have extensive political purchase and reach. In this context, as anthropologist Nicolas Jaoul (2009) argues, Ambedkar as a symbol of the Dalit struggle has profound political implications and has helped to promote ideals of and aspirations towards citizenship amongst the most marginalised. Dalit struggles to insert ‘their’ iconic symbol into public spaces, he notes, are ‘the focal point for renewed aspirations towards democracy’ and important assertions of Dalit’s acceptance within wider society. 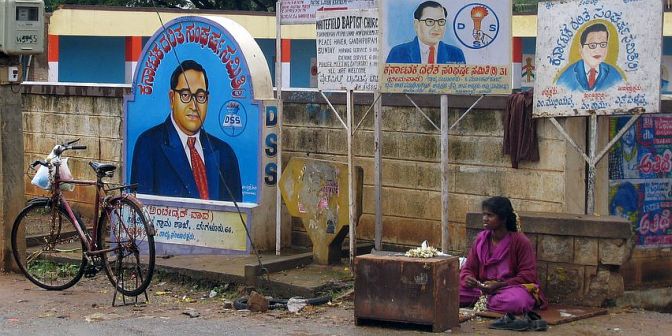 As early as the 1950s, research in Uttar Pradesh found that Scheduled Castes perceived the Constitution ‘gifted to them by Ambedkar’ as a counter to the Hindu caste laws and codes (Mahar-Moller 1958). Despite his own cautions against deification, it is easy to find those who see Ambedkar as a Godlike figure. Insults to or desecration of Ambedkar statues, thus, routinely result in protest as they are interpreted as a symbolic exclusion of Dalits from the body politic (Rao 2009). It is against this background that the emotive force of the cartoon row begins to make sense.

The issue is not, however, simply confined to statues and symbols. The insertion of Ambedkar statues into the mainstream stands as a proxy for the inclusion of Dalit concerns and issues and highlights the continued marginalisation of such voices in national spaces and narratives. Aditya Nigam (2006) demonstrates how historians have adopted a modernist nationalist portrayal of caste as a discredited relic of tradition, and the silencing of caste also permeates social scientific analysis. A high-profile book by leading academics, for instance, can speak of ‘India’s national culture’ with barely a mention of caste. Various visionaries, from Gandhi to Azad, are excerpted, but there is no room for the insights of lower caste and untouchable leaders like Phule, Periyar or Ambedkar (Sen 2003). From this perspective, Dalit leaders feel the perceived demeaning of Ambedkar as a double insult: ‘not only do our heroes not feature prominently, but when they do they are ridiculed’. This was the sentiment best expressed by Thirumavalavan’s tub-thumping performance in parliament.

Whilst we might wish that Dalit politicians would follow Ambedkar’s example of carefully thought-through and considered action, therefore, it would be unfair to cast their actions in the same mould as other recent attempts at political censorship and curricula interference. Dalit politics is still seeking recognition and acceptance into the mainstream rather than writing official versions of events that others are expected to follow. The danger that this could leach into authoritarian tendencies is evident in Dalit leader Athavale’s refusal to condemn the vandalism of his party cadres, but Dalits remain, for the most part, lions rather than hunters when it comes to the narration of history.

With their commitment to more diverse histories and voices and their attempt to be more creative in their pedagogy, the NCERT text-books are assuredly a step in the right direction, but when the figure of Ambedkar is made to bear the weight of Dalit aspirations and expectations alone, his symbolic value is increased. We need to read his transformation into a sacrosanct prophet-like figure in this light. When school texts and histories routinely chart the histories of the suppressed, those figures may carry less symbolic and emotional weight. Until that time, we may bemoan the sensitivity of the marginalised from our positions of comfort, but we should also seek to place them in context.

Nigam, A 2006. The Insurrection of Little Selves. New Delhi: OUP.

Rao, A. 2009. The Caste Question: Dalits and the Politics of Modern India. Ranikhet: Permanent Black.

This article was written by Hugo Gorringe.

Dr. Hugo Gorringe is a Senior Lecturer in Sociology at the University of Edinburgh. He is also the author of Untouchable Citizens : Dalit Movements and Democratisation in Tamil Nadu.