The Life and Times of Rettamalai Srinivasan

Hailing from a political and intellectual tradition that precedes the Dravidian movement, Rettamalai Srinivasan is a social justice icon who carried a indomitable spirit fighting for equality and civil rights for the Dalits rubbing shoulders with another great icon of modern India, B.R.Ambedkar. Fondly referred as “Thatha” (Grandpa), Rettamalai Srinivasan was born on July 7, 1860 in a poor Dalit (Paraiyar) family in Kancheepuram in the erstwhile Madras Presidency. He was the brother-in-law of the famous Dalit ideologue Pandit Iyothee Thass. During the early days of his political career in Nilgiris, he closely worked with the Theosophical society and Henry Steele Olcott. He also served as the president of Scheduled Castes Federation, Madras and Madras Provincial Depressed Classes Federation.

Srinivasan had his education in Coimbatore and later worked as an accountant in Nilgiris, it was during this time he became much concerned about the evils of untouchability that he faced as a student. After coming to Chennai in 1890 for almost three years he did a lot of research on how to uplift the Depressed Classes in the presidency. He went around all the northern districts and delta areas and found how this class of people was denied equal rights like access to common property resources, public spaces etc and if demanded they were attacked violently.

After coming to Chennai, Rettamalai Srinivasan established and led the Paraiyar Mahajana Sabha in 1891 which later became Adi-Dravida Mahajana Sabha in 1893. In October 1893 he founded a Tamil newspaper at the age of 32, called ‘Paraiyan’, which highlighted the sufferings of the Depressed Classes (later classified as Scheduled Castes). Over a period of time it emerged as the mouthpiece of the DCs and other marginalized communities in Madras Presidency. Within two days four hundred copies were sold in Chennai, after three months the daily was made into a weekly and after two years they had their own printing press. The magazine came out for 7 years and when he left India for South Africa it had a slow death.

Dalit intellectual and author of Theendapadatha Noolkal (Untouched Books) Stalin Rajangam, informs us that during this time he frequently had discussions with Congress leaders and Justice Party on the measures to be taken to uplift the DCs. He organized a meeting on Dec 23, 1893 at Wesleyan Missionary Hall in Madras against the Congress petition demanding that Indian Civil Services Examination should be conducted in India, he opposed the move and said that if caste Hindus become civil servants they will suppress the poor depressed classes and gave a counter petition signed by 3412 people and submitted it to General Sir George Chesney at a massive meeting which actually made the Depressed Classes assert themselves and fight for their rights at that point of time. On October 21, 1898 he submitted a petition how the children of the Depressed Classes were denied admission in many schools, responding to his petition the government issued an order that the Chennai Municipality should establish schools.

From 1900 to 1921 he left India and went to East Africa and then to South Africa, Srinivasan had the opportunity to listen to Gandhi’s talk in Zanzibar in East Africa in 1902 but met him at Phoenix in South Africa during 1906 and the friendship that developed between the two continued for long. He met Gandhi thrice at Yeravada Jail on the Poona Pact issue, though critical of his stand on issues of untouchability, religion based reforms and separate electorates, he in his autobiography, Jeeviya Sarithira Surukkam ( A Brief Autobiography) published in 1939 states that “Gandhiji a great soul, on behalf of depressed classes, collected lakhs of rupees and had spend them on the education of their children, fought so many years to eradicate untouchability but was not able to change the heart of the caste Hindus.”

In 1921 he returned to India, in 1923, he was nominated for the Madras Legislative Council, Srinivasan was instrumental in bringing legislations that allowed the DCs to use the public streets, buildings, wells and market. People who prevent them from using these common properties were warned that a fine of Rs.100 would be imposed on them. He also published booklets highlighting those legislations among the Depressed Classes, says writer V.Alex, author of Dalit History Series in Tamil. He was also instrumental in formation of a Labour Welfare Department in 1919 by the British government to ameliorate the sufferings of the Depressed Classes.The Adi Dravida Mahajana Sabha pleaded with the government for reserving posts in public services proportionate to their numerical strength. They also opposed to the Harijan Seva Sangh’s claims about the uplift of the DCs. R.Srinivasan also opined that the legislations could not eliminate the injustices and humiliations faced by the DCs in the name of religion; he argued that despite legislations like the Removal of Civil Disabilities Act, the absence of penalty clauses provoked the upper castes to exploit those occupying the lowest rungs.

He was given Rao Sahib title on January 1, 1926 at Saidapet, Madras. Rao Bahadur title on June 3, 1930 and Diwan Bahadur on January 1, 1936, recognizing his tireless efforts fighting for the rights of the Depressed Classes community. The then Chingelpet Collector, P.Sitarama Bandulu in a meeting at Saidapet said that Mr. Srinivasan was largely seen as an mentor, intellectual and comrade got the goodwill of the Depressed Classes in South India and South Africa through his untiring efforts to emancipate them. 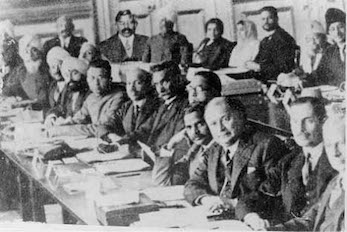 Rettamalai Srinivasan (sixth from right) is seen here at the First Round Table Conference, held at London in 1930. He is seated next to Dr. B.R.Ambedkar.

Srinivasan, who died at the age of 85, worked closely with Babasaheb Ambedkar, Rettaimalai Srinivasan in his autobiography, states that, “Both me and Dr.Ambedkar worked as nail and flesh, we both went as representatives of the DCs at the Second Round Table Conference in London and fought for their political rights.” In August 1930, R.Srinivasan, president of Madras Provincial Depressed Classes Federation disapproved the idea of reservation in joint electorates and categorically preferred separate electorates and insisted that representation should be on the basis of their numerical strength and the disabilities faced by them in the region.

In November 1930, Rettamalai Srinivasan along with Dr.Ambedkar got an opportunity to represent the interests of the DCs, both favoured the extension of minority status to the DCs and felt that such a measure alone could ensure their proper political representation.At the Windsor castle, Srinivasan brought significant publicity to the state of affairs for Dalits when he refused to shake King George V’s hand, publicly proclaiming, “I am an untouchable.”In a memorandum entitled “A Scheme of Political Safeguards for the Protection of Depressed Classes in the Future Constitution of Self Governing India, they specified the terms and conditions under which the DCs would accept the rule of majority in a self-governing India.

Following Ambedkar’s decision to convert, Srinivasan issued a statement demanding him to reconsider his decision, he said,

It is a well-known fact that strictly speaking the Depressed Classes do not belong to the Hindu fold. They are like Muslims and Indian Christians. Dr. Ambedkar is a gentleman of culture and a conscientious man. The voiceless millions of India expect in him a friend and a philosopher to guide their destiny and all communities sincerely hope he will change his mind (Statement released by Rettamalai Srinivasan on October 20. 1935 in Madras Presidency).

Srinivasan as an M.L.C., in the Provincial government of Madras Presidency and President of Madras Provincial Scheduled Castes Federation maintained consistently that only a Constitution that was planned under the auspices of Parliament in England could serve justice to the Depressed Classes. Talking from his experience as an activist where he had spent more than half a century working for the Depressed Classes that,

Our experience of the last 50 years does not permit us to believe in the Congress demand for the constitution framed through a constituent assembly. Though the congress has now emphasized the protection of minority interests, as a signatory to the Poona Pact, I may say that we do not attach any value to such assertions. We are convinced that there is the widest divergence between the professions and practices of Congress. The Depressed Classes today are emphatically of the view that only separate electorates will really safeguard their interests(Times of India, May 11, 1937).

Historian Raj Sekhar Basu in his latest work, Nandanar’s Children: The Paraiyans’ Tryst with Destiny, Tamil Nadu 1850 – 1956 says that R.Srinivasan along with another Depressed Class leader N.Sivaraj supported the separate electorates; he like Dr.Ambedkar believed that Gandhi’s religious approach would not lead to the material improvement of the DCs, but felt that legislations favouring temple entry would definitely improve the social status of the DCs.In 1932, Ambedkar, M. C. Rajah and R. Srinivasan joined the board of the Servants of Untouchables Society established by Mahatma Gandhi. However, shortly afterwards, the three of them withdrew from the Board, which was later renamed as Harijan Seva Sangh.

There had been efforts to keep the memory of Rettamalai Srinivasan alive. The central government issued commemorative stamps in memory of Rettamalai Srinivasan. The Liberation Panthers Party constructed a memorial in Otteri near Madras and named it Urimai Kalam (‘Field of Rights,’ signifying his role in fighting for civil rights). On 6 July, 2011, the Tamil Nadu state government recognized his birth anniversary to be observed as a government function. Still there has been no adequate efforts to compile his contributions and particularly on his journalistic efforts.

Karthikeyan Damodaran is a doctoral candidate at the University of Edinburgh. His research focuses on caste processions and commemorations in Tamil Nadu, and his interests include, identity politics, social movements, caste and class, film studies and urban studies. He was previously working as a Correspondent for The Hindu Newspaper in India.