Göttingen stands up for annihilation of caste

A huge mobilization of Dalits (former Untouchables) rages in the state of Gujarat, India whereby recently Dalits had to face caste violence. A few weeks ago members of the Dalit community in the city of Una, who were removing carcasses, were brutally attacked by the “cow vigilantes”. Dalits have been historically forced into removing carcasses and human excreta. These occupations, which were sanctioned by Brahmanical caste system, are practiced even today in large parts of the country. In one of the biggest and most inspiring anti-caste mass mobilizations of Dalits in Gujarat have challenged the present Hindu-nationalist government head on. Gujarat is the same state, which had witnessed mass-murder of more than 2000 Muslims a decade ago.

Untouchable communities (aka Dalits and Schedule Castes) in Gujarat have come together and have decided to end this degrading form of religiously sanctioned labour of removing dead animals manually. This is in addition to clearing excreta, which is another form of forced labour. Dalit communities and their organisations not merely stand against such demeaning labour but also demand reparation in the form of land, education, and jobs as alternative opportunities. They not just stand against the present day Hindu fascist government but also resist its vigilantism of beef-eating communities.

This militant vegetarianism and ‘cow vigilantism’, which are products of caste-extremism, needs to be condemned by people all across the world. This needs attention particularly, because the government instead of protecting its own people is fuelling the casteist persecution of the beef-eating communities. Killing people for their choice of food, such as beef, is against humanity. Needless to say, neither the state nor the vigilantes would ever succeed against the cultural rights, such as, the beef eating food habits of the people. However, considering the increasing brutalities on those who struggle against casteism, the global solidarity with the oppressed people of India is the need of the hour.It is the moral responsibility of the entire world to stand in solidarity with those who are engaged in struggles against the Brahmanical caste system and religiously sanctioned menial labour practices as well as food fascism.

Demonstration Against Caste Violence In India

In an effort to support and showcase solidarity with the Dalits in Gujarat India, on 9th August 2016 a demonstration was organised in the city Göttingen, Germany. To the best of our knowledge, it is for the first time that such a demonstration on the issue of caste-based atrocities has been organised in Germany. This is despite the fact that several universities and institutes in Germany have been conducting research on India for over a century. The event in Göttingen was meant to sensitise the people in Germany about the violent persecution of Dalits by those upholding the Brahmanical caste system. Most importantly, we wanted to stand in solidarity with the Dalits who are struggling against the caste system in Gujarat in particular and India in general.

Research scholars, faculty, students  and non-teaching staff of University of Gottingen standing up for caste annihilation.

The Dalits of Gujarat have renewed the anti-caste movement in the most inspiring way. They have pledged to give up the humiliating labour of skinning the dead animals and disposing of the dead carcasses and have instead demanded agricultural land from state. They have not only challenged the Brahmanical caste order but they are the one of the most powerful force resisting Hindutva fascist forces in contemporary India. They have also brought together other marginalised groups such as Muslims who have been the victims of communal violence. The struggling Dalits certainly deserve and require all the solidarity and support from international community. 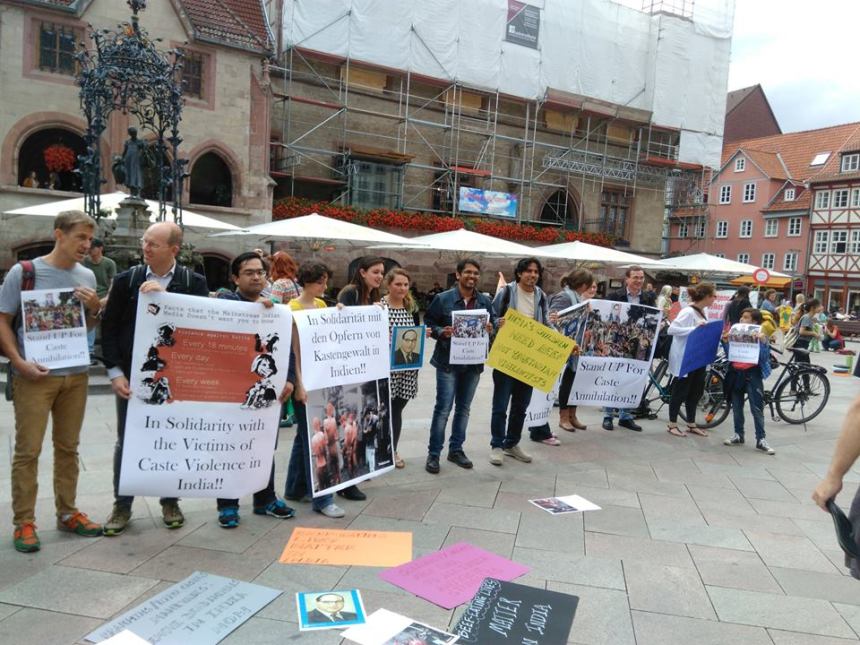 Students, research fellows and non teaching staff of University of Göttingen at a protest demonstration held in Göttingen, Germany, condemning the caste violence against Dalits in India.

The demonstration was organised by research fellows and students based at the Centre for Modern Indian Studies (CeMIS), University of Göttingen: Sumeet Mhaskar, Gajendran Ayyathurai, Dickens Leonard M and Chittibabu Padavala. Students, research fellows and non-teaching staff from CeMIS, Max Planck Insitute and Goethe Institute partiiapted in the demonstration. The demonstration was concluded with a speech by Gajendran Ayyathurai, and Naima Tiné and Karl Müller-Bahlke read out the statement condemning caste based atrocities in India. The copies of the statement in German and English language were distributed during demonstration.