#MyDressMyChoice: The day we defeated silence

They want to re-claim their bodies.

They are condemning the humiliating public stripping of three Kenyan women earlier in the month.

On this day, 17th November, 2014, many took to Nairobi streets – and marched from Uhuru Park (in the city’s CBD ) to the Embassava Sacco bus stage on Accra Road, where a mob had been filmed ripping off a woman’s clothes.

In the last one year, ten women have been stripped in public, for something that was described as ‘indecent’ dressing.

This photo-essay is a narrative of the protest.

At Freedom Corner, protest organisers are reading a statement to the media. This about 11.00 AM.

The protest march proceeds through the city centre. This is about 11:45 AM. 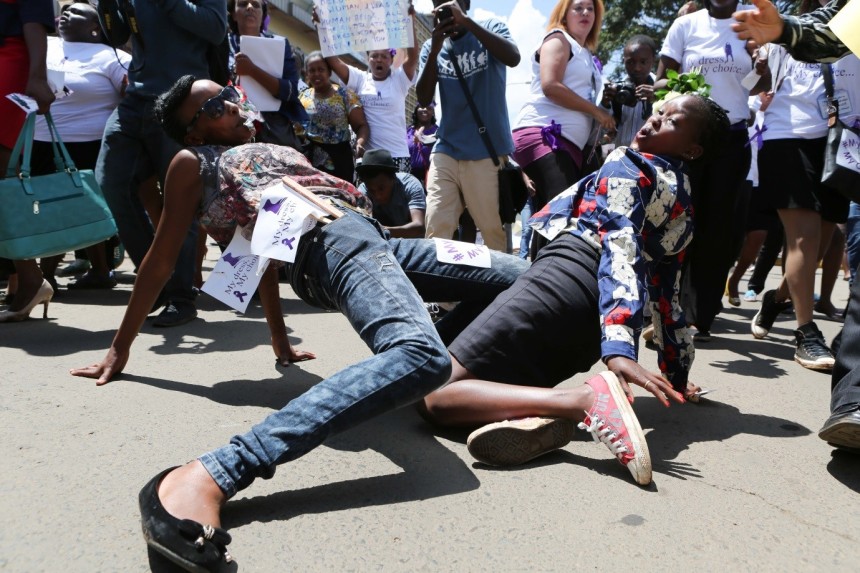 Our bodies, our choices. Protestors dancing during the protest march. This is about 12: 00 noon.

The adorning of mini-skirts formed part of the protest. Women want to have the choice to exercise bodily autonomy, and feel comfortable in dressing of their own choice. This is about 12: 00 noon. 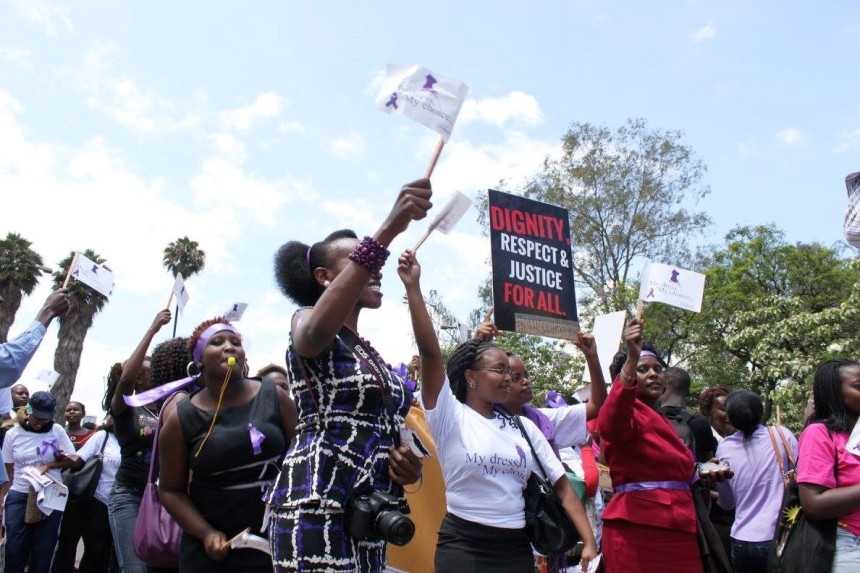 We demand dignity, respect and justice for all. Protestors chanting ‘My dress, My Choice’ across the streets of Nairobi. This is about 12:30 PM. 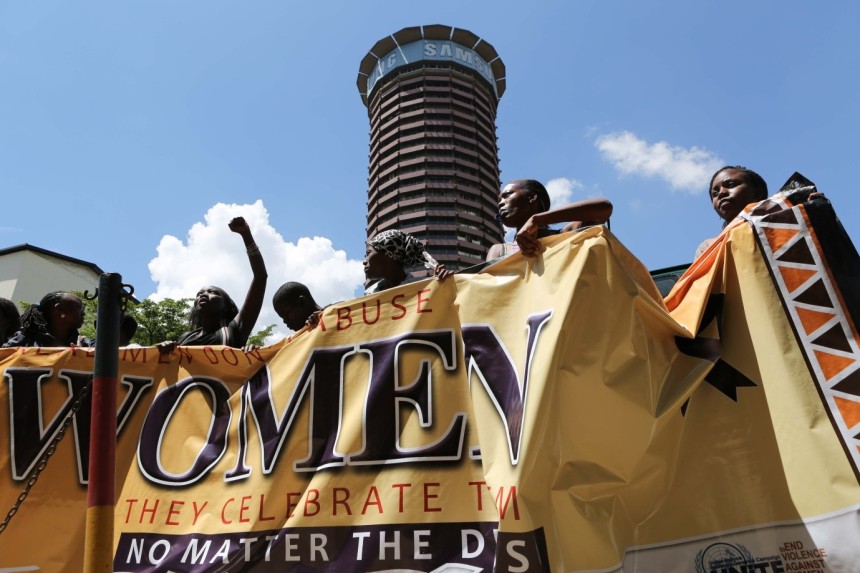 No society that oppresses women is a civilised society. Protestors make a stand against gender-based violence. This is 12: 45 PM. 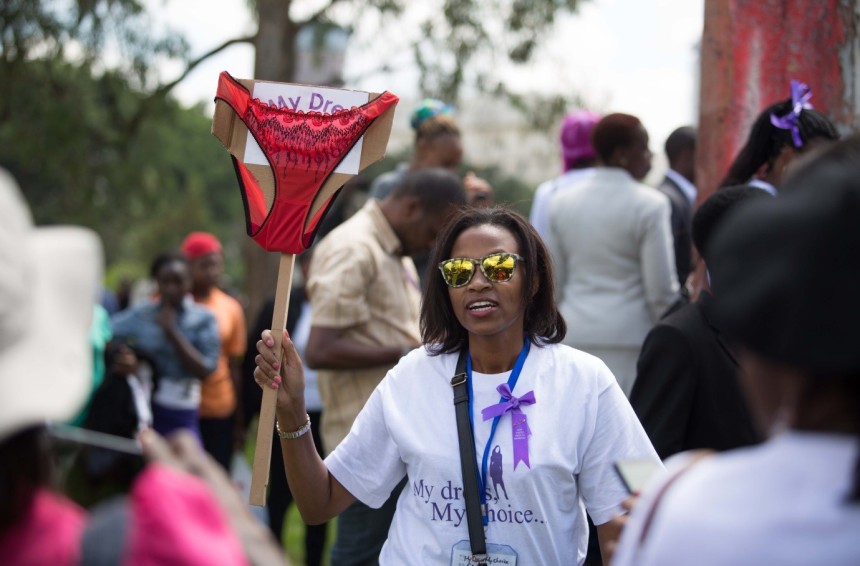 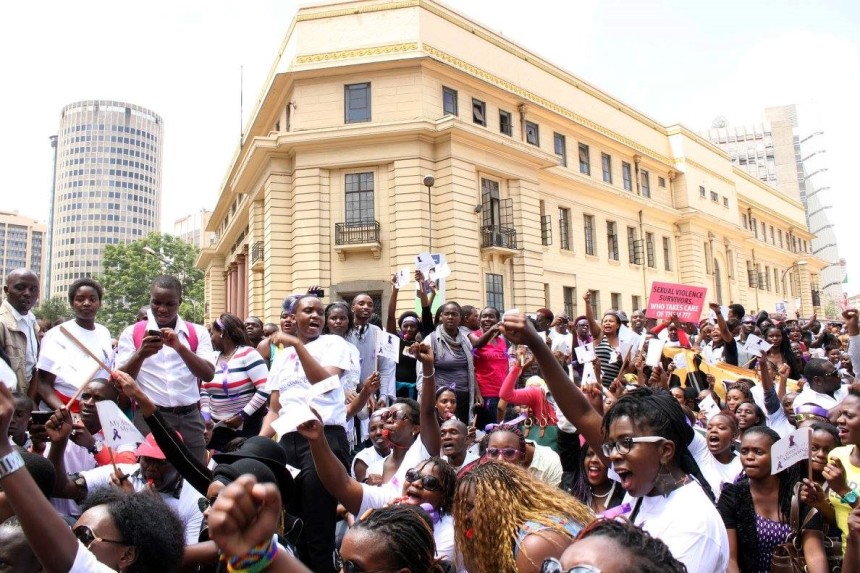 Protest has arrived and sets camp near Embassava Sacco bus stage, where the public stripping of a woman’s clothes took place recently. This is about 1: 00 PM.

“SHAME ON YOU”! An angry protestor stops an Embassava Sacco bus. This is about 1: 05 PM. 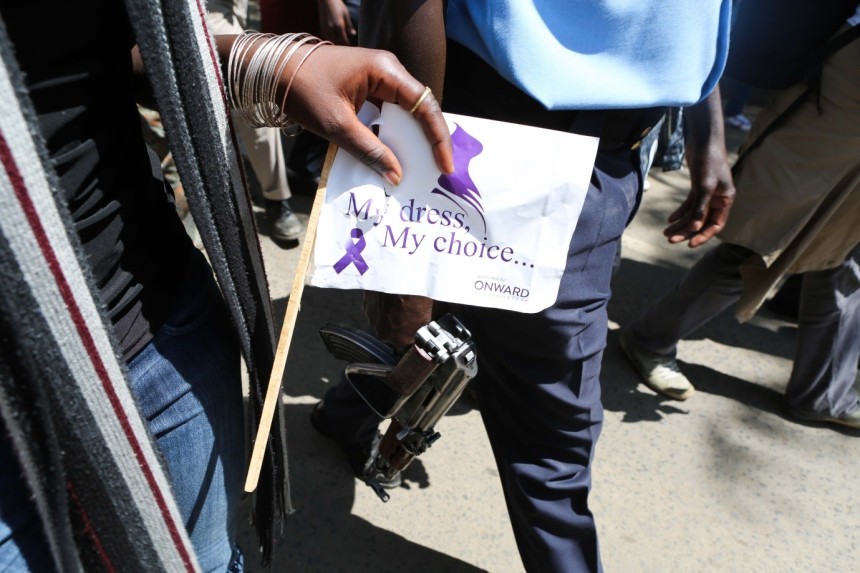 On Tom Mboya Street, tension is beginning to build up. This is about 1: 15 pm.

A scuffle and a counter-protest are quickly developing. This is about 1: 17 PM. 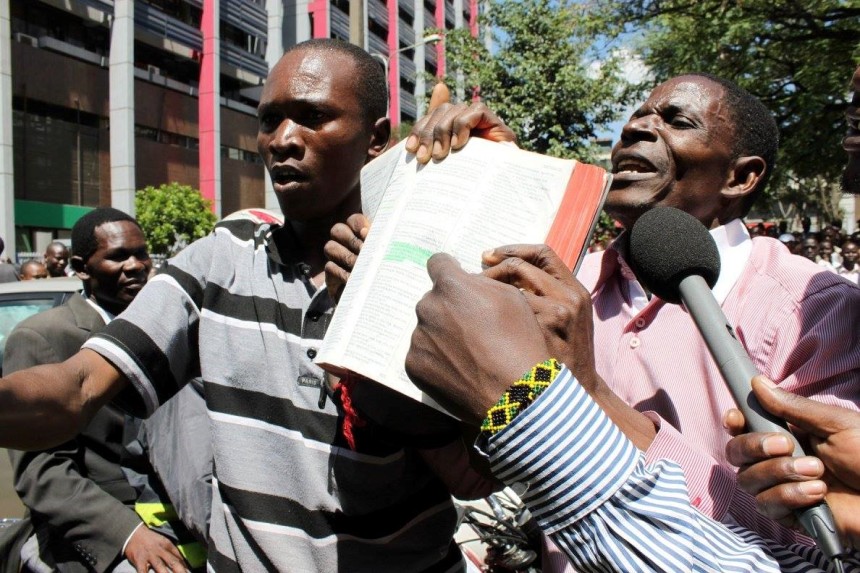 Counter-protestors, the majority of whom are men, have come with the bible. This is about 1: 30 PM.

Counter-protestors are threatening to strip us naked while the police stand and watch. This is about 1: 45 PM. 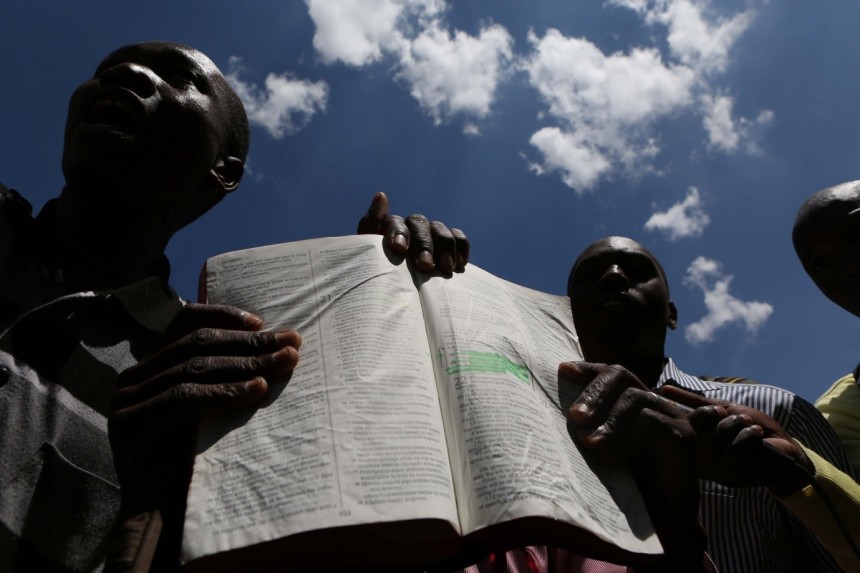 Counter-protestors are defending patriarchy with bible verses. This is about 1: 50 PM.

Counter-protestors are getting violent. They have forcefully taken one of our banners, and some are groping women. This is about 2: 00 P.M.

One woman, a counter-protestor, invokes culture and religion, demanding that women dress decently. This is about 2: 10 PM. 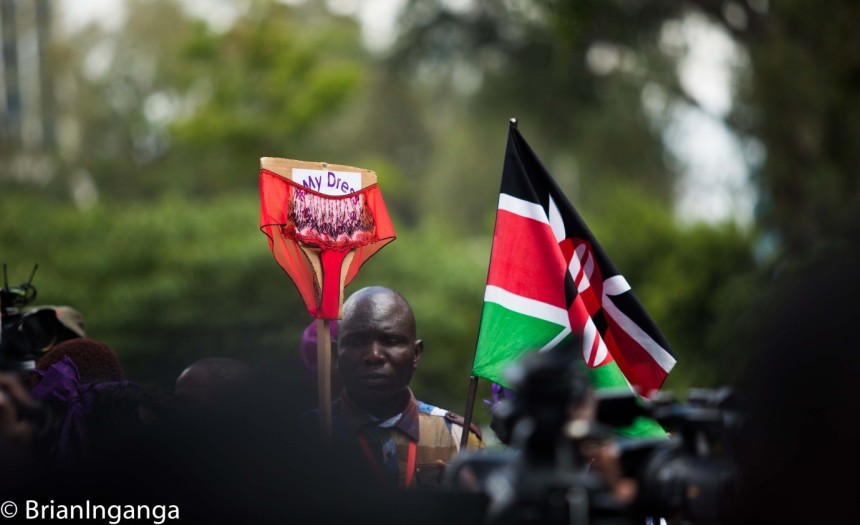 Society is at war with itself. Despite the counter-protest, we press on. This is about 2: 15 PM. 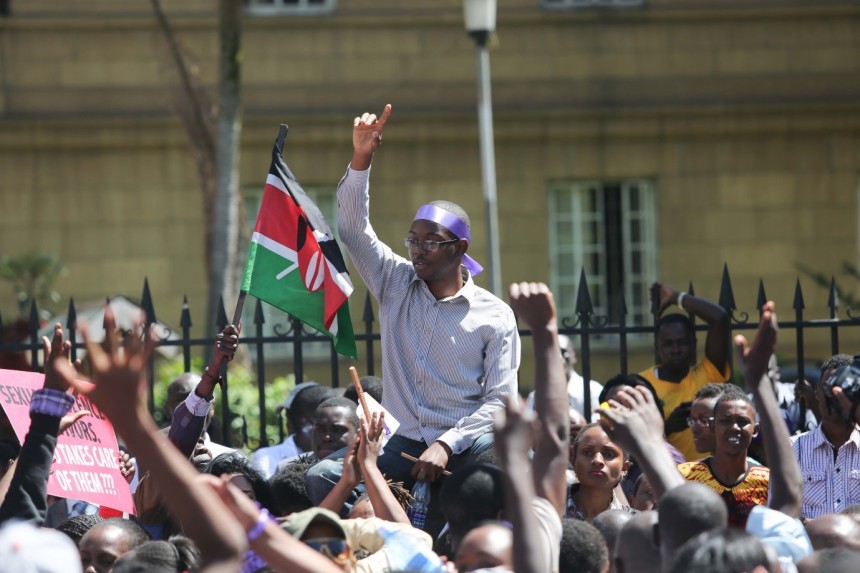 We make our stand outside the Supreme Court of Kenya. This is about 2: 30 PM. 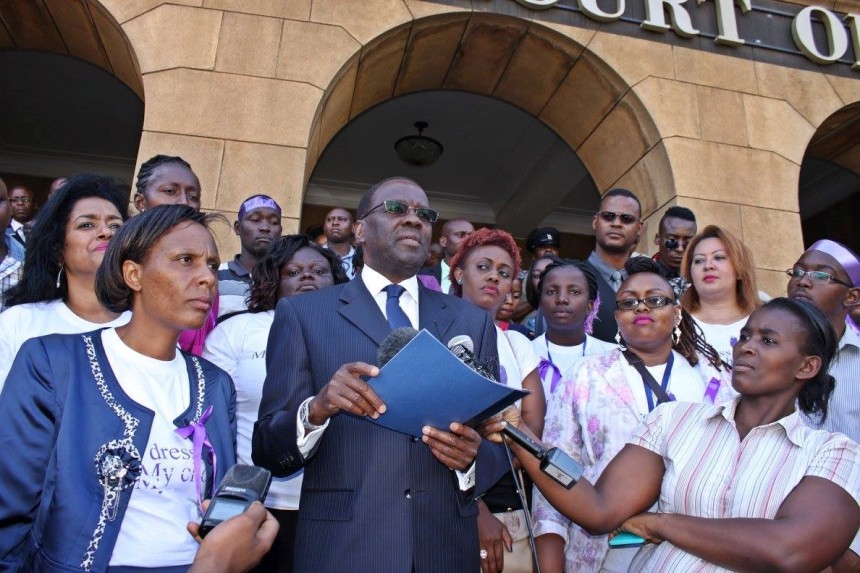 The Chief Justice of Kenya, Dr. Willy Mutunga (centre), receives the petition. He promises that justice to the victims shall be realised. This is about 2: 35 PM. 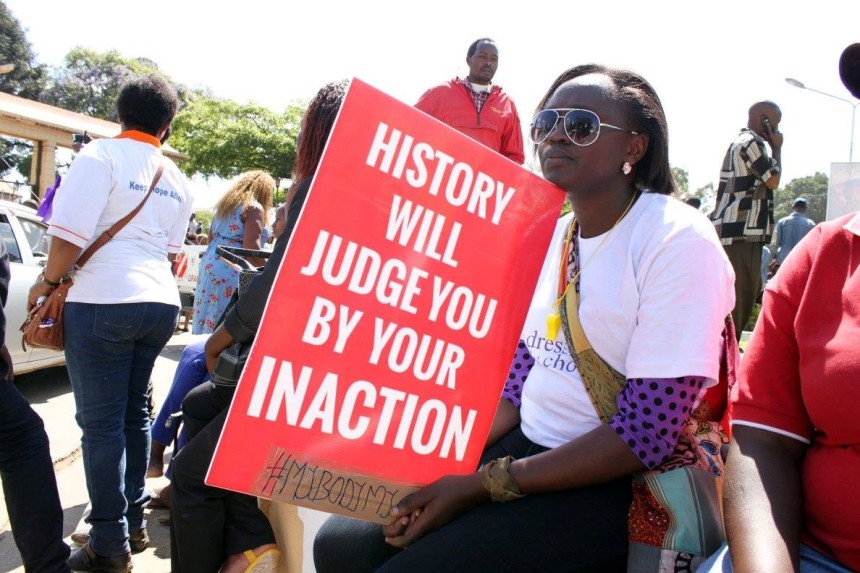 History will judge you by your inaction. The protest is successful. A statement has been made. This is about 2:50PM. 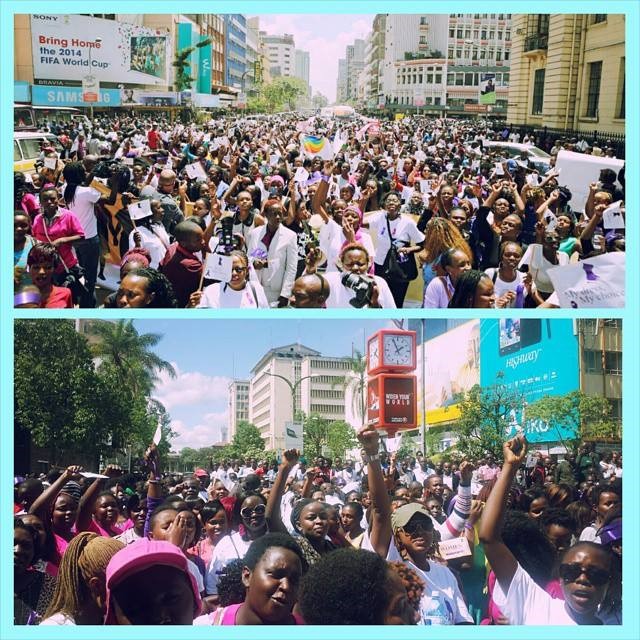 This day silence we defeated.

#MyDressMyChoice Silence shall no longer be a woman.

There is an online petition calling on the President of Kenya to take action. Click here to add your voice.

This piece is the first in a multi-part series on Routes about patriarchal control of women’s bodies. Stay tuned for the next installment!

Brian Inganga is an award-winning photographer and humanitarian worker. Brian is also the co-founder of Change Mtaani CBO in Kibera Slums, Nairobi, and he works at PAWA 254.