In this photo series, Nadira Lamrad reports on student protests at City University of Hong Kong.

Students are calling for a strike action on September 22nd in response to the #fakedemocracy being imposed on Hong Kong for the 2017 elections. This collection of photos is a snapshot of university student political discourse in a very complicated situation.

1 September 2014: #CityUHK #democracy wall: response to CCP decision on #HK 2017 vote 1. boycott class don’t boycott education [pro-student strike message]. 2. Should we resign to our fate? Or should we fight for our lives? [I think. This is a rough translation. It is much more eloquent in Chinese.]

3 September 2014: “Embrace hope. Fearless resistance.” from the #HongKong Federation of Social Work Students. Response to the #fakedemocracy being imposed on #HK in 2017

3 September 2014: On either side of #CityUHK main escalators. Top: “Student’s strike to struggle for universal suffrage” Bottom: “Disobedience not Resignation” #HK #fakedemocracy

3 September, 2014: Above the entrance to the main building: “Student strike is imminent. Disobedience – hang on to your fate [future].” #CityUHK student union on #HK #fakedemocracy 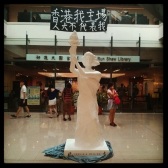 3 September, 2014: The Goddess of Democracy below the banner that says “Hong Kong is my home • The National People’s Congress does not represent me” #CityUHK students on the #fakedemocracy being imposed on #HK in the 2017 election.

5 September, 2014: “Hope lies with the people • Change begins with protest” #CityUHK student union drumming up support ahead of tonight’s meeting to discuss the student strike [7pm, Y5-302]. The same slogans were used at the rally on August 31st after the announcement that #fakedemocracy will be imposed on #HK. 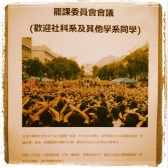 12 September, 2014: An announcement on the democracy wall that #CityUHK student union has committed to the student strike beginning on Sept. 22 for 1 week. There will be a meeting today at the library 5pm to discuss advocacy, mobilization, and movement strategies. #HK #fakedemocracy 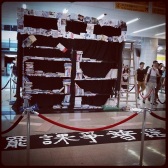 12 September, 2014: “罷 9 二 二” Protest installation art at #CityUHK main entrance. Books & mags arranged as the character 罷 [strike] with the boards on the floor displaying the date: Sept. 22nd. The banner is the same as the one by the escalators “Student’s strike to struggle for universal suffrage.” 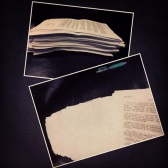 Nadira Lamrad is a PhD Candidate at City University of Hong Kong and co-founder of www.SocialAlterations.com